Here I’d like to introduce some new features of Me and My Shadow 0.5 development version. In fact, some of them are already completed for many years. I think the most of them are stable enough, so maybe the 0.5 beta version will be available soon.

The graphics library is switched from SDL1.2 to SDL2. This work is mostly done by oyvindln during 2016-2018. The SDL2 has builtin hardware accelerated 2D graphics rendering, which allows us to render 2D image with additional alpha modulation and/or color modulation, stretching and rotation.

The achievements and statistics system was indeed implemented by me in 2012. You can see:

This is an example of achievement: 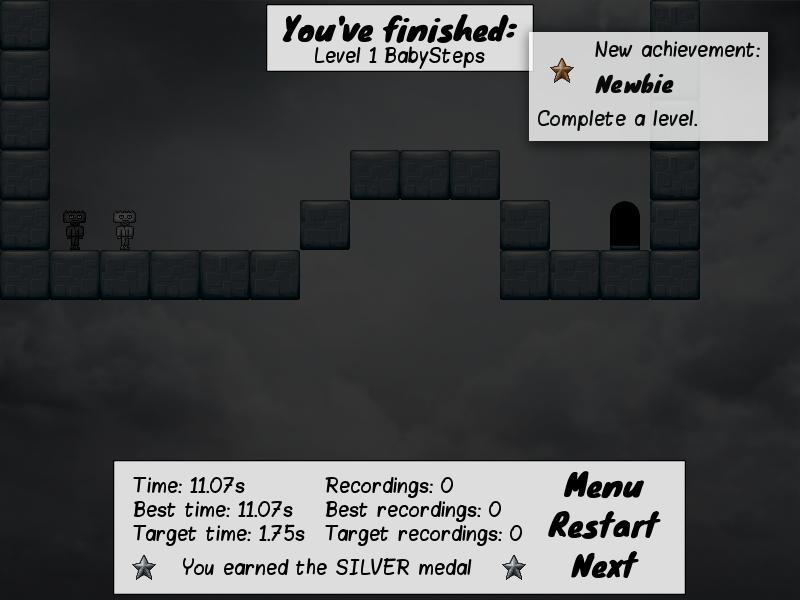 This is the achievement screen: 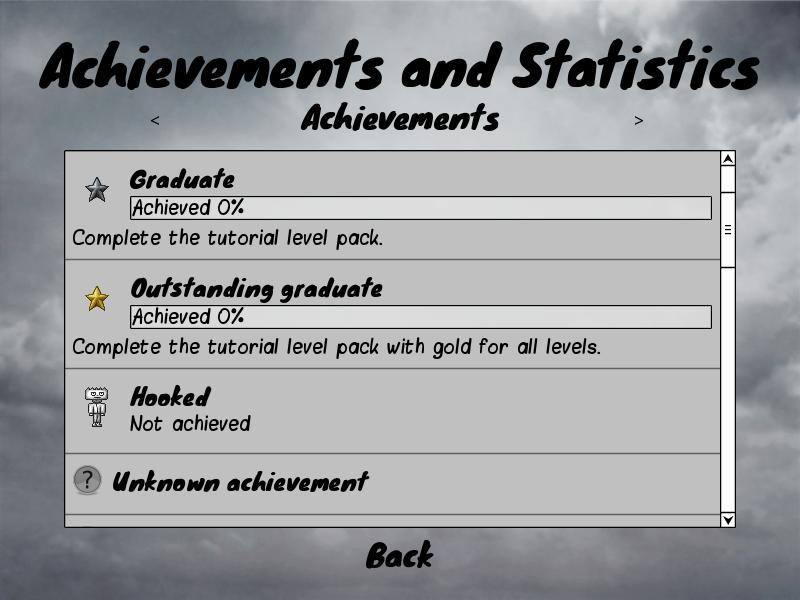 This is the statistics screen: 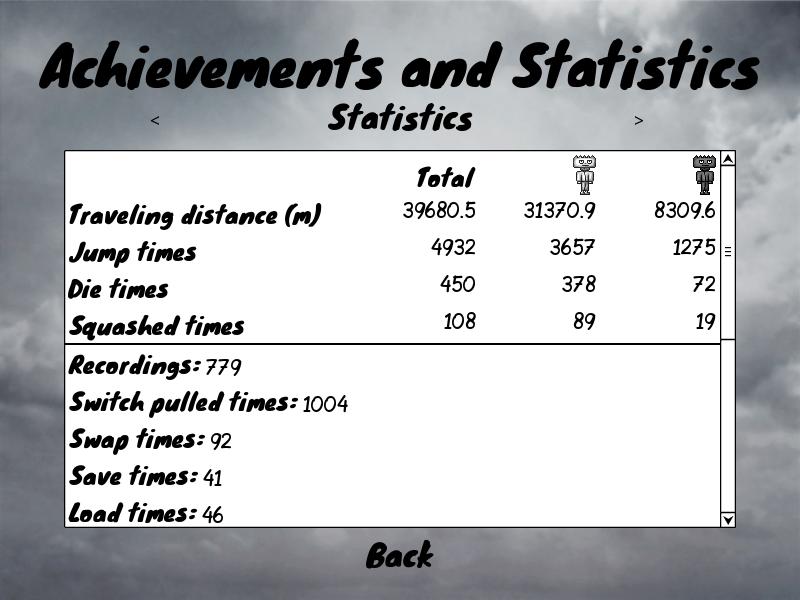 The scripting support was also developed in 2012-2013. At first it was discussed in V0.5 brainstorm thread. One of the main developer, Edward Lii, was a little bit worried about it:

I’ve thought about scripting support before and although I see some uses for it I’m afraid it will be misused.
Take for example XMoto, they have scripting support in their levels and there are some fun/impressive levels made thanks to that.
But there are also a lot of levels that are unclear, they change certain things without giving any graphical feedback

Interestingly the initial implementation of scripting support is also by Edward Lii:

I’ve made some progress regarding scripting.
I decided to try and implement Lua and it is easier than I expected. 😄

The following may be implemented after V0.5 is released due to the amounts of work.

There is a new type of block added in game: the pushable block. This is also implemented by Edward Lii in 2012, see here.

This is an early preview of pushable block which uses the image of moving block as a temporary placeholder, and showed the old behavior of moving blocks.

This shows an early bug of collision with pushable blocks. The current behavior is you will get squashed once you teleport into any blocks.

This is the current version of pushable blocks as well as new behavior.

As you can see in the above screenshot, now the blocks can be resized in game. This is again implemented by Edward Lii, in 2013, see here.

This shows a development experiment which confirms the sizable block codes are actually working. Ugly programmer art, isn’t it? 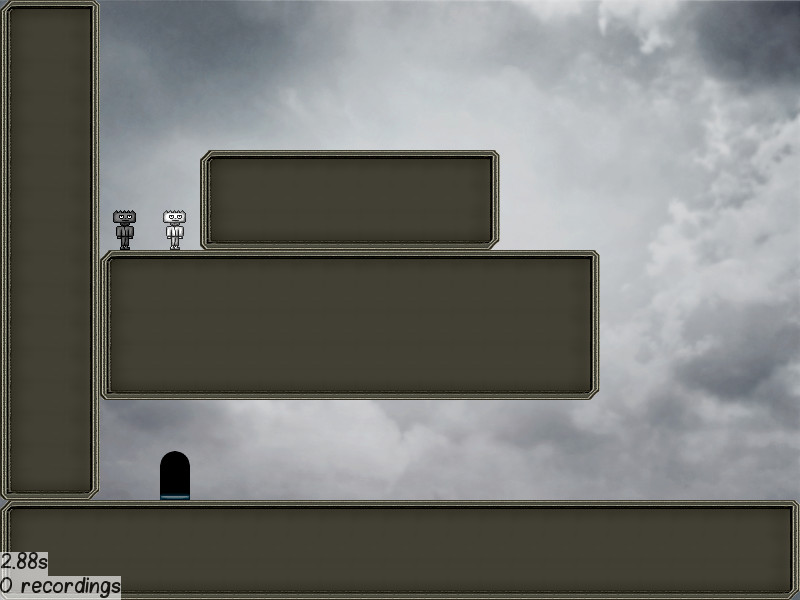 NOTE: The current themes are still not adapted to the sizable blocks. Art contributions are welcome!

The suggestion to add scenery block support is given by Tedium in 2013, see here.

This is a mockup by Tedium for the applications of scenery blocks (NOTE: highly compressed). 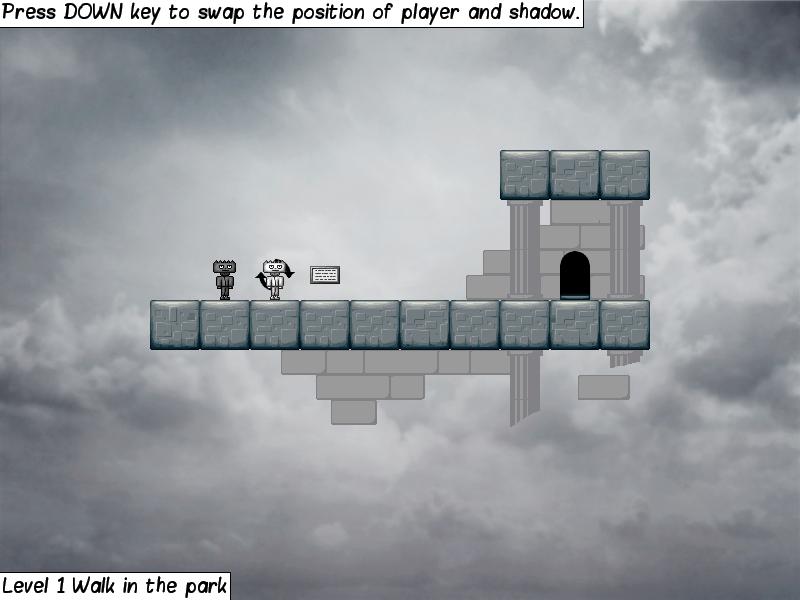 The block visibility property is added. This is usually used with scripting.

The context menu for block and level is added, which supersedes the ENTER key to configuration method in V0.4.

The level editor undo/redo patch is provided by squarecross in 2014, see here. However, the patch is not reviewed until recently, due to the game development halted. Now the patch is merged into the master branch with substantial modifications. The corresponding GUI is also added.

The addon GUI is nicer than the one in V0.4. We adopted the mockup provided by odamite, see here.

Of course, you can make a clone and host the addon anywhere (even use the addon offline by using file:// protocol) by passing command line arguments to the game.

« Port the website to Jekyll! Me and My Shadow 0.5 Beta released »